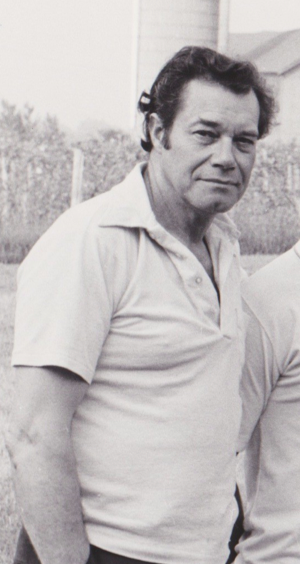 I wake up before the rooster crows and the chickens cluck and the dogs
start barking. It’s dark. And a little eerie. All the floorboards
creak so I don’t want to get up. There is a hole in the floor in the
middle of the hall and I have dreams that I fall in. Or dream monsters
live in it and will come and get me if I make the floorboards creak.
I’ve tried for years to find a quiet way to walk across the floor.
The cracking plaster and random graffiti on the wall adds to the
effect. It feels like the house is not getting proper attention. But
everything works. All the outlets, light switches, windows. Sometimes
there is a leak in the infernal roof. But Grampy will fix it. He’s
good at fixing things. All kinds of things. It may not be the
prettiest solution. But by gum it will work. At least until it breaks
again.

I can only make out a couple letters of my uncles name. He wrote it in
big white letters. Not too bright, but you can’t miss it. Unless its
too dark and you can only make out part of a t and a little o. There
are quite a few rooms in this house. There where a lot of kids who
lived here. 8 siblings, but many others have stayed here. Only Scott
remains at the house. The others have moved on. Grandma and Grampy
live here of course. I thought Grampy would die here, but that wasn’t
the case.
Eventually the house was too much for the old guy. The man who would
battle in ww2, battle machinery on a daily basis, and confront mother
nature on more than one occasion. His house was both a blessing and a
curse.
So I fall back to sleep.

I’m awoken at the noise of what sounds like a moose in the kitchen.
The kitchen is across the creaky hall, down the stairs, back through
another hall and on the right. So the noise is loud to wake me up. And
it does sound like a moose. A big one. In the kitchen. But it’s not.
It’s Grampy getting coffee. Or rather it’s Grampy blowing his nose
before he has his coffee and reads the paper.

The rooster is up. And so are the chickens. The dogs are out with the
neighbor doing whatever it is he does. And Grampy is reading the
paper. This is my favorite time to see him. This is usually the
happiest I ever see him. Unless he is working on something with uncle
Craig. I won’t disturb him, he’s had his share of little kids, or
yahoos, and the allure has left his mind. He’s thinking about what he
is going to do today. It’s Saturday. He’ll try and get that gravely
running and cut the lawn. He’ll have to go do whatever it is he does
in that garden. He grows wonderful vegetables. There is a garden the
size of a football field out towards the rail road tracks. 5 years ago
it was near the grapes, but you have to rotate your crops or else the
ground goes bad.

As a kid, we always played. We played under the trees along the
driveway, we played out in the evergreen trees, we played on the
tracks and in the creek. Sometimes grandma would take us to the
cockeran’s pool and we would play on the inner tubes and the diving
board. And all the while Grampy would work.

He would fix the gravely, mow the yards and work in his garden. Then
uncle Craig would come over and they would work on one of my aunts
cars. One of them was always broken. Maybe he would need a part or a
tool and he would have to go to a friends house or the store to see if
he could find it. Most of the time he would just rig something out of
spare parts in the chicken coop.

He always had a chicken coop, but it never had any chickens. Wasps,
bees, and ground hogs yes, but I never saw a chicken. That was before
my time. They did have them. And my mom can tell of stories where Rex
would attack my uncle craig. Almost tearing out his eye. That’s my
mom’s story so I’ll let her tell it. The chicken coup I know looks like
it was burned down and refused to go down. A stubborn coop to match my
stubborn Grampy. I can say he was resistant to change. He had an idea
of what the world was and he represented that view. Never one to jump
on a soapbox, he would share thought in a conversation. And many
conversations where had at his dinner table. Usually followed by some
scrabble where grandma and my mom would battle for the win. But before
scrabble there was pie. And before pie is when we would have time for
the whole family to talk.

There were a lot of people at the dinner table. So many that I was
often relegated to the kids table. I wasn’t the oldest as long as aunt
Michelle sat with us. Sometimes she got a seat at the adult table. But
I rarely if ever made the cut. I never really understood what they
talked about at the adult table anyway. It usually had to deal with
work. And the kid table was usually about play. Way more fun with the
kids.

Grampy always sat at the head of the table. He was usually served
last, but we didn’t eat until he said grace. We didn’t hold hands or
share the duties. It was always Grampy and always the same. He would
bow his head, fold his hands and begin his graceful prayer. Then smile
and dive into his huge offering. He had a veraciois appetite and ate
anything put on his plate. I never saw him turn down a helping. And
following his feast, he would eat pie. Not just one, we would usually
have several choices. Apple, cherry, rhubarb, and in the fall,
pumpkin. Everything was grown in his yard.
He had cherry trees, apple trees, a rhubarb patch and a pumpkin patch.
So much work for so much reward. He would have a slice of whatever pie
you had. At least one of each.

He was a man who worked hard for the people loved. But not too hard to
miss on the simple things in life.